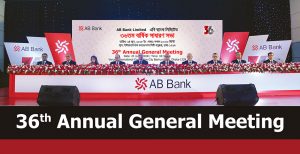 The 36th Annual General Meeting of AB Bank was held on Sunday, June 24, 2018 at International Convention City Bashundhara. The Board of Directors proposed “No Dividends” for the year 2017 which was approved by the shareholders unanimously. The meeting elected Barrister Khairul Alam Choudhury and re-elected Mr. Feroz Ahmed and Md. Mesbahul Haque as Directors of the Bank. The meeting also adopted Directors’ Report, Auditor’s Report, Audited Financial Statements, and unanimously approved appointment of M/s. S.F. Ahmed & Co. Chartered Accountants, as Statutory Auditors of the Bank for the year 2018.

The AGM was presided over by Mr. M. A. Awal, Chairman of the Board. Other Directors and the President & Managing Director Mr. Moshiur Rahman Chowdhury were also present. A good number of shareholders participated in the deliberation. The AGM was also attended by patrons and well-wishers of the Bank.