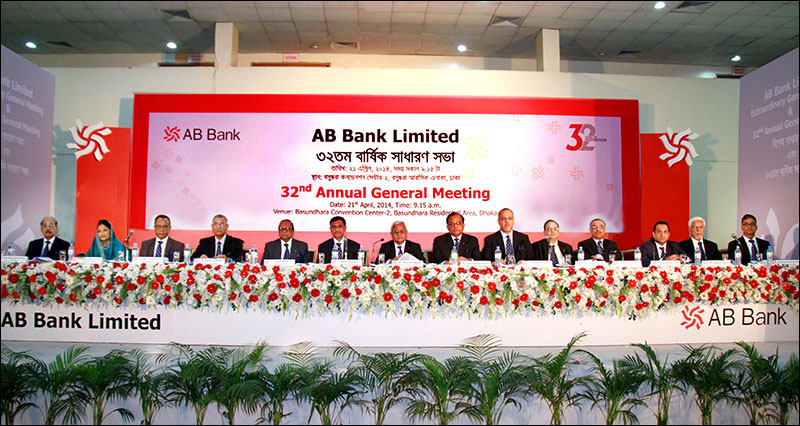 AB Bank Limited approved 7% Stock & 5% Cash Dividend for its shareholders at the 32nd Annual General Meeting (AGM) of the Bank held on April 21, 2014 (Monday) at the Bashundhara Convention Centre-2, Dhaka. The AGM approved the Annual Report and the audited Financial Statements of the Bank for the year 2013.

Earlier an Extra-Ordinary General Meeting (EGM) of the Bank was held on the same day at 9.00 am at the same venue. A Special Resolution was approved in the EGM for issuance of ‘AB Bank Subordinated Bond’ up to BDT 250.00 crore for raising Tier-II Capital subject to approval of the concerned Regulatory Authorities. Total capital of Bank now stands at Tk.1915 Crore.

As per provisions of SEC 15(10) of Bank Company (Amendment) Act-2013, no more than two persons of the same family shall be entitled to hold the post of Director at the same time. Therefore, contest between Mr. Salim Ahmed and Mr. Sajedur Seraj was resolved through secret ballot. Election Commissioner Advocate Muhammad Mohsen Rashed declared Mr. Salim Ahmed as elected Director of AB Bank Limited who bagged a total of 11.40 crore votes while his contestant Mr. Sajedur Seraj got only 57 thousand of the casted votes.

The 32nd AGM was presided over by the Chairman of the Bank, Mr. M. Wahidul Haque. Vice-Chairman Mr. Salim Ahmed and other Directors, President and Managing Director Mr. Shamim A. Chaudhury were present at the Annual General Meeting which witnessed a good turn-out of shareholders, patrons, clients and well-wishers.