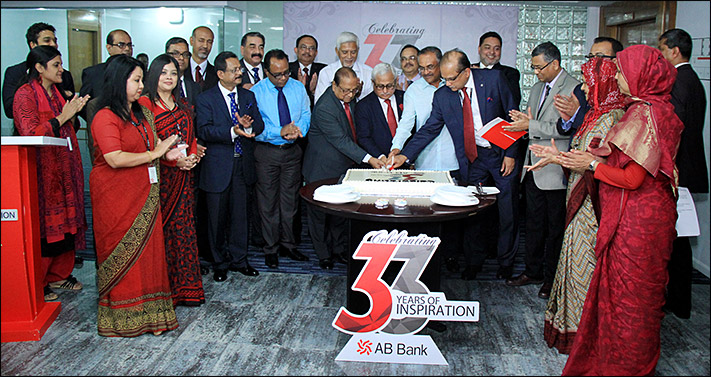 AB Bank Limited, the first Private Commercial Bank of the country, celebrated its 33rd founding anniversary on April 12, 2015.  All the 92 branches of the Bank and its subsidiaries in Bangladesh as well as its Mumbai branch and other overseas subsidiaries observed the day in a befitting manner.
To celebrate this occasion, AB Bank organized Flag Hoisting and Cake Cutting Ceremony in the Head Office which ended with Doa Mahfil. Mr. M. Wahidul Haque, Chairman of AB Bank, Directors of the Bank and Mr. Shamim Ahmed Chaudhury, President and Managing Director graced the occasion with their presence.

The Chairman of AB Bank Limited expressed his gratitude to all shareholders, clients, well-wishers and regulators for their continued support and trust in AB Bank.  He also thanked the Bank’s present and past employees for their dedicated services.

AB has extensively widened its services over the last three decades in both home and abroad. The Bank opened its very first branch at Karwan Bazar on 12th April 1982 and now has a successful footprint of 92 branches and one overseas branch in Mumbai, India. It has 239 ATMs spread across the country and has plans for more ATMs booths to be opened this year. It has 6 subsidiary companies including one exchange house in UK, Off-shore Banking Unit and Custodial services along with its core banking activities. The Bank opened its Representative Office at Yangon, Myanmar and at London, UK for extending its foreign operations.

AB Bank has contributed in all spheres of National Development in its 33 years of existence. It participates actively in all fields of Corporate Social Responsibility and has extended significant assistance to autistic children, burn units, cancer patients, people affected during natural calamities etc.